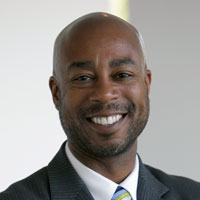 Dr. Gary L. Ellison is the deputy director of the Division of Cancer Control and Population Sciences (DCCPS) at the National Cancer Institute (NCI). Prior to his current position, Dr. Ellison was the chief of the Environmental Epidemiology Branch (EEB) in the division’s Epidemiology and Genomics Research Program (EGRP), where he oversaw extramural research focused on modifiable factors and cancer risk. Dr. Ellison led program directors within EEB with expertise spanning all domains of the exposome, including the general external (e.g., broader social context), specific external (e.g., lifestyle factors; environmental pollutants; chemical, physical, and infectious agents), and internal environments (e.g., biomarkers of effect, early damage). He joined EGRP as an epidemiologist and program director in 2008, becoming chief of EEB in 2016.

Prior to joining EGRP, Dr. Ellison worked as a faculty member in the Department of Family and Community Medicine at the University of Maryland School of Medicine. He was also a contractor for the Centers for Disease Control and Prevention, where he was project manager for the National Program of Cancer Registries Cancer Surveillance System (NPCR-CSS). There, he led a multidisciplinary team in aggregating cancer incidence data and reporting on quality, timeliness, and completeness of state cancer registry data.

Dr. Ellison holds a Master of Public Health from the Division of Biostatistics at Emory University Rollins School of Public Health and a PhD in epidemiology from the University of South Carolina. Dr. Ellison’s doctoral training was in cancer epidemiology, with an emphasis on racial disparities in prostate cancer risk. He completed postdoctoral training at Howard University’s National Human Genome Center in Washington, DC, and at NCI as a cancer prevention fellow.