In December 2010, Kimberly noticed a bump on her back. She thought it was a harmless cyst and wasn’t overly concerned about it, but her husband didn’t like the look of it and suggested that she have a doctor examine it. A trip to the dermatologist led to a biopsy of the site. Later, a call came from her doctor with the difficult news: Kimberly had stage 4 melanoma. There was no known primary site for her cancer; she had a subcutaneous tumor.

Kimberly was shocked and devastated. Her first thought was of her two children, who were ages 2 and 5 at the time. She didn’t want her family to have to live their lives without her, and that became her biggest motivating factor.

When Kimberly was first diagnosed, the scan revealed that she had more than 15 tumors. Though none were found on her major organs, the survival rate for her cancer still was not good – nor were the treatment options. Kimberly’s first doctor told her to go home, pray, and look for a clinical trial. As a result, she and her husband scoured the internet for clinical trials while playing with their small children. Kimberly found the research exhausting at times, but the experience taught her to advocate for herself and increased her knowledge of her disease. They ultimately found clinical trials that she qualified for in both Texas and Tennessee.

Kimberly officially started treatment, as part of a clinical trial, in January 2011. The hospital was located more than 3 hours away from her home, but she was determined not to let her treatment regimen interfere with her kids’ daily routine. On the days she received treatment, she got up around 5:30 a.m., drove to the hospital, and then rushed home for bath and bedtime.

Kimberly’s treatment led to tumor shrinkage in some areas, but she also experienced tumor growths in other parts of her body. She started a new phase 1 clinical trial in June 2011 with an immunotherapy drug, in the hopes that all of her tumors would shrink. Her doctors advised her that she could have a delayed response to the treatment, she could have immediate growth or shrinkage, or she could see no results at all. Her first scan showed a positive early response, and while Kimberly made sure to celebrate every milestone and accomplishment, she remained guarded, in case the next results weren’t as positive.

In late 2011, Kimberly had an MRI – she was experiencing back pain and had started to lose the ability to walk. The scan revealed a 3 centimeter tumor pressing against her spine. She had emergency surgery, and while her surgeon was able to remove some of the tumor, the medical team was unable to get it all. Kimberly had to learn how to walk again after the procedure. Once she recovered from the surgery, Kimberly was able to stay on her clinical trial for 6 more weeks.

In the summer of 2012, Kimberly’s white blood cell count was high, and she was diagnosed with chronic myeloid leukemia (CML). She had to stop her melanoma treatments and switch to targeted therapy treatments for CML. During that time, Kimberly’s medical team kept an eye on her melanoma, as she still had some active tumors.

In the fall of 2012, two years after her official diagnosis, Kimberly’s melanoma PET scan was completely clear; and by February 2013, her CML was in complete remission. Kimberly’s survival odds didn’t look good at the start of her treatment journey, but she notes that she never gave up hope, faced all her obstacles head-on, prayed consistently, and relied on her support system.

Kimberly shares that she has never been a very good sick person, and she refused to allow her loved ones to sit around and be sad. She tried her best to make the most of her situation and kept trying to live her life. She went on trips where she would explore and eat, always taking someone with her. Her support system enabled her to continue living despite her health issues. Kimberly’s mother had passed away a year prior to Kimberly’s diagnosis, and the relatives who were able to help did not live locally. Kimberly’s husband, friends, and community members rallied around her to provide the support she needed to get through treatment. She had a close circle of friends who were willing to take care of household needs, handle pickup and drop-off schedules for school, consistently gather at Kimberly’s home for dinner, and drive her to treatment sessions. “The day-to-day things … [were] … one of the biggest helps—just providing a support system and [keeping] a sense of normalcy.” Kimberly and her family also relied on their church community to help them cope, and she believes that she would not have gotten through treatment without their support and prayers.

Though Kimberly is in remission, her diagnosis still impacts her today. Her life is planned around when her next scan will be. “You don’t just walk out of that and you’re done. I always describe it as cancer is the lowest hanging fruit in your life. It is always kind of over you. You always wonder if it will come back, what you will do if it does.” As a result of her experiences, Kimberly and her family have made a point to become involved in the cancer community: she has participated in fundraising efforts, including hosting multiple 5Ks for melanoma research, and she has shared her story with other individuals going through treatment.

Kimberly says that she found her purpose in life when her son was diagnosed with osteosarcoma at the age of 12. She was able to share her experiences with her son, to comfort him while he was going through his own treatment journey. She became an advocate for him, making sure that his concerns were addressed through treatment and beyond. Today, Kimberly’s son has been cancer-free for four years, and she helps support others going through similar situations.

Kimberly lives her life very intentionally now. She recognizes that every day is a gift and doesn’t want to waste the time that she has left. She wants to be a good mother, wants her kids to grow up with good values, and when difficult things come her way, she tackles them in the best way that she knows how. Kimberly makes a point to notice others who may need support, shows up for people when she can, and displays empathy and solidarity for those who may be suffering silently—especially mothers. She also makes sure to tell people that they are doing a good job, something she needed to be told frequently during her treatment journey.

Kimberly doesn’t know how long she will be in remission, but she and her husband make sure to keep up with the latest research while self-advocating for their family. “You know yourself, your own body, your health. Conveying that message only helps.” Kimberly’s life goal hasn’t changed. She still wants to be the best wife, mother, and friend that she can be. If someone is inspired or given hope due to her story, she considers that to be a bonus. The message that she would like to share with others is that cancer “is tragic and devastating, and you don’t get to choose .… There will be grief involved, whether it is the life that you knew, or what. [But] you can get through that.” 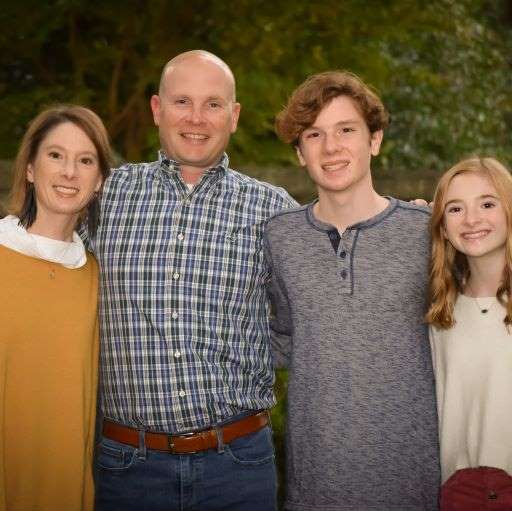 [Cancer] is tragic and devastating, and you don’t get to choose .… There will be grief involved, whether it is the life that you knew, or what. [But] you can get through that.”